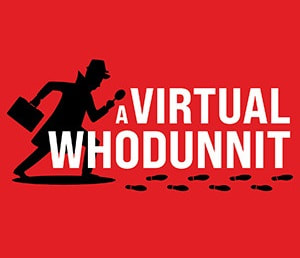 The Walpole Footlighters are pleased to announce auditions for their next virtual production, A Virtual Whodunnit, by Flip Kobler and Cindy Marcus, directed by Steve Small. Actors should complete the form at http://bit.ly/WhodunnitAudition and upload a video audition using one of the monologues available at http://bit.ly/WhodunnitMonologues by Friday, September 25 at 6:00 pm. Rehearsals will take place on Zoom Tuesday and Thursday evenings beginning September 29, with Zoom performances scheduled October 23 & 24 at 8:00 PM. Actors will be responsible for pulling together some costumes and props. For questions, please contact the director at publicity@footlighters.com.

A Virtual Whodunnit starts during a virtual family meeting when the patriarch announces he is changing his will, but dies suddenly and comically before signing the updated document. Murder is suspected, everyone is a suspect, and the detective discovers that they all had both motive and opportunity. The audience gets to vote for the killer, and the play has multiple endings.

The age ranges given below are preferences; they are not set in stone. The roles referenced are just to give those auditioning a better idea of the character, but impersonations aren’t the goal.

Characters
Augustus Sterling (Male, mid -50’s to mid-60’s): The patriarch who runs both the family and the family business with an iron fist. He’s used to getting his way, and says a lot of things that sound like they could have been said by President Trump.

Florina Sterling (Female, preferably not older than mid-30’s):  The fourth Mrs. Sterling speaks with a thick vampire-esque accent. Florina is a spoiled little gold digger who has had it with her husband’s three exes. Think Melania Trump?

Bullion Sterling (Male, mid-30’s): Bullion is the CEO of the family business. He is Sterling’s only son and heir apparent. Except that it isn’t apparent to Sterling, who treats Bullion as an inconvenient afterthought. Think Gob Bluth from Arrested Development.
​
Juniper Everton (Female, late 20’s – early 30’s): Daddy’s little girl who can do no wrong. But she’d like to try. Think Cher from Clueless as an adult.

Eugene Everton (Male, late 20’s – early 30’s): Juniper’s husband and CFO of the family business. A milquetoast man who is easily forgettable, and Sterling often does. He’s Mr. Cellophane from Chicago, without a song.

Macy Gables (Female, early to mid-20’s): The youngest of Sterling’s children, a flower-child tree-hugger who doesn’t want anything to do with Daddy’s money. Macy is a cross between Janice the Muppet and Alexis Rose of Schitt’s Creek.

Haley Hawkins (Female, early to mid-30’s): VP of Technology for the family business, but not a member of the family. Haley hates that Sterling treats her like an assistant, and she definitely shouldn’t be under-estimated. Think a techy Elle Woods from Legally Blonde.

Barry Schwartz (Male, mid-30’s to mid-40’): Sterling’s personal lawyer with a secret agenda of his own. Think Saul Goodman from Breaking Bad.

Rockford Sloan (Either sex, any age): The hard-boiled detective who will wade through quicksand to find the truth. S/he does film noir-ish asides to the audience. Think Sam Spade in The Maltese Falcon.
For all auditions, please bring a headshot and resume, if possible, and please download and complete our auditionfrm.pdf or come prepared to fill out the form before the audition starts, including scheduling conflicts.

For more information, please email us at audition_info@footlighters.com.

Please check our Audition Tips to help you prepare for auditions.

The Walpole Footlighters Playhouse is located at 2 Scout Road, East Walpole, MA, 508-668-8446. For inquiries concerning auditions, contact the Member at Large at memberatlarge@footlighters.com or email audition_info@footlighters.com.

Auditions for all Footlighters shows are open to everyone. Most auditions consist of readings from the script. A prepared song is required for musical auditions. Details are usually posted a few weeks before the scheduled audition dates.

Footlighters auditions are typically held at 7:00 p.m. or 7:30 p.m. at the theater at 2 Scout Road. Unless otherwise specified, no appointment is necessary. Audition notices will be posted here regularly as well as in the Walpole Times, the Hometown Weekly, NE Theatre 411, and Stage Source.