I'm Not Rappaport
by Herb Gardner
Directed by Barbara Pettis

Set in a secluded spot in New York's Central Park, this award-winning play is about two octogenarians determined to fight off all attempts to put them out to pasture. Talk about an odd couple! Nat is a lifelong radical determined to fight injustice (real and imagined) and is also something of a spinner of fantasies. The other half of this unlikely partnership is Midge, a Black apartment super, who spends his days in the park hiding out from tenants who want him to retire. A funny and poignant comedy.

"Terrific comic timing...production values at the Scout Road playhouse are exceptional." -- Candace Leary, The Daily News Transcript
"The outstanding performances by Waldo Fielding and Gerald Halfhide are worth the price of admission...a perfect piece of theater." -- Guy Giampapa, Preview
"Waldo Fielding [plays] this 82-year-old reprobate as though he were born for the role. He has excellent help from a cast mere fractions of his age--mostly from Gerald Halfhide as his curmudgeonly and nay-saying straight-man Midge." -- Larry Stark, Theater Mirror
"[Fielding and Halfhide] play the comic and tragic moments of the play with equal intensity and skill. Karen Fanale as daughter Clara is superb." -- Shirley Esthimer, The Walpole Times
"Thoughtful, funny, and uplifting...[Karen Fanale's] big scene with Fielding was pivotal, touching and effective." -- Jim Dorman, The Patriot Ledger
"Gerald Halfhide of Framingham gave a flawless performance...Nat Moyer is played with panache by Walpole Footlighters veteran Waldo Fielding...Karen Fanale of Somerville brings a polished intensity to the emotional role of Clara." -- Ann Walter, The Sun Chronicle

Morning's at Seven
by Paul Osborn
Directed by Joe Scholz

A heartwarming comedy about life in a small Midwestern town in 1939, Morning's at Seven concerns the humorously extended family of four maturing sisters. Ida, Cora and Arry have lived next door to each other for fifty years. Esther, the eldest at age 70, lives a few blocks away. The quiet life they share with their husbands becomes unhinged and their manners and loyalties tested when Ida's 40-year-old son Homer at last brings Myrtle, his long-time girlfriend home to meet the folks. Homer, however, cannot break away from home long enough to pop the question, so Myrtle decides she'll have to take things into her own hands. This charming portrait of small town America was revived on Broadway in 2002 to critical acclaim.
​

Blithe Spirit is set in the Kent country home of sophisticated author Charles Condomine. To research his work-in-progress, "The Unseen," he enlists the mystical talents of the superbly batty Madame Arcati - Spiritual Advisor. When Madame Arcati holds a séance in the Condomine's living room, it brings Charles and his wife Ruth uncomfortably close to ‘the Other World’ by invoking the spectre of Charles’ first wife, Elvira. Content to ‘hang around the house,’ the sensual Elvira plots a lethal reconciliation with poor Charles, to wildly comedic results. An enchanting Coward comedy!

"...a sterling cast of players and topnotch direction....John Shanahan is perfect as the beleaguered Charles...and Stacey Erikson is a perfect foil for his tirades....Christine Grudinskas dominates the stage as Madame Arcati....Lorna McKenzie as the ghostly first wife is brilliant....Katie Curley takes the role of the maid Edith and runs with it." - Shirley Esthimer, Walpole Times
"well paced and meticulously blocked. The actors are consistently good and work together flawlessly....Christine Grudinskas is delightfully dotty and amiably off-center....Lorna McKenzie plays the "morally untidy" Elvira with a teasing charm." - Candace Leary, Daily News Transcript
"Incredible acting, direction, costumes, set design, and special effects make this show a must-see for theatergoers looking for a laugh." - Michael Duran, Hometown Weekly
"Lorna McKenzie...slinks and slithers onstage to steal the show as Elvira Condomine...[John Shanahan] executes those double-takes and double entendres with perfect comic timing. - Ann Walter, Attleboro Sun-Chronicle
"With sophisticated wit and non-stop humor, [Blithe Spirit] makes for an evening of good entertainment. Director Marianne Phinney has assembled an outstanding cast....Grudinskas is perfect as the wacky medium." - Guy Giampapa, Preview 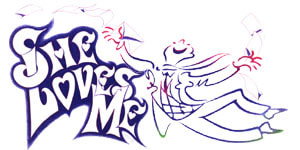 It's the rare musical theater aficionado who doesn't have a soft spot for this intimate show, considered by many to be the most charming musical ever written. Georg and Amalia are two feuding clerks in a European parfumerie during the 1930s who secretly find solace in their anonymous romantic pen pals, little knowing their respective correspondents are none other than each other. Funny, intelligent, honest and sentimental, “She Loves Me” is a warm romantic comedy with an endearing innocence and a touch of old world elegance and nostalgia, yet as universal and relevant as ever in this age of internet romances. This heart-warming work by Jerry Bock and Sheldon Harnick (the songwriting team of “Fiddler On The Roof”) and Joe Masteroff (the bookwriter of “Cabaret") is a pleasure whatever the occasion.