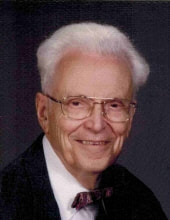 Bruce D. Hainsworth, 97, died peacefully on March 12, 2020 at Norwood Hospital. Prior to his 2017 move to the Village at Willow Crossings in Mansfield, Bruce (and his signature bow ties) had been a fixture in Foxboro for more years than anyone can count. He was well-known for his dry sense of humor as well as his kind and gentle disposition.

After high school in Pittsfield, Bruce earned his BS at Worcester Polytechnic Institute before enlisting for World War II, where he served in the Navy in the Pacific theater. When he returned home, he earned his MS at Cornell University and began his career at the Foxboro Company as a chemical engineer.

He married Patricia Conway in 1954 and they set up their home on South Street. Together they raised four children – Mary, Eugenie, John, and Paul. Bruce enjoyed chronicling his family’s milestones, vacations, and everyday goings-on with his camera, and he leaves a treasure trove of 35mm slides to his heirs. He also spent many happy hours puttering in his workshop, where he built tables, bookcases, kitchen counters, and desks for each of his children.

Bruce worked for 40 years at the Foxboro Company in a wide range of engineering and management positions. He was the Company’s representative at the Massachusetts Business Roundtable and other industry organizations, and also served on various committees proposing changes in the healthcare insurance industry.

Bruce was a member of Bethany Congregational Church in Foxboro, serving as an Elder for many years. He also worked with the Foxboro Public Schools on various planning and curriculum issues. In later years, Bruce was a volunteer house manager and helper for the Walpole Footlighters for many years. While Bruce worked, his wife Pat acted and directed on our stage in countless productions. You likely heard Bruce and Pat perform together as the priest calling Bingo numbers and the woman who called "BINGO!" in our production of Good People.

Relatives and friends are kindly invited to attend calling hours on Sunday, March 15, 2020 from 1 PM to 4 PM at the Roberts and Sons Funeral Home, 30 South Street, Foxborough. Due to the current health concerns, a memorial gathering for Bruce will be held at a later date.
​
In lieu of flowers we encourage you to honor Bruce’s memory by giving to a charity of your choice, or any other kind deed.