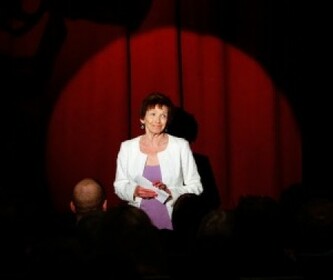 Barbara W. Pettis of Franklin, MA died unexpectedly on July 2 from complications of surgery - just shy of her 81st birthday.

The phrase "one of a kind" has never been truer than it is of Barbara. Born of proud German stock on July 29, 1936 in Scranton, Pennsylvania, Barbara had a congenital condition that affected her mobility, but she refused to feel sorry for herself and stoically led a full, rich life that most able-bodied people only dream about. Raised to value higher education, she graduated from Syracuse University with a Bachelor of Fine Arts degree in 1958. After college, she worked in New York City for a series of children's magazines eventually earning promotion to Art Editor. She married in 1961 and moved to Northern New Jersey for a time. In 1966 the family moved to Franklin, MA where she became a pioneering marketing representative in the nascent technology industry for 30 years. She retired from Digital Equipment Corporation in 1995. That left her time to pursue her first love – theatre. For a time, she worked as a theatre coach at the Franklin Center for the Performing Arts. She traveled to New York as often as possible to see Broadway shows and enjoy fine cuisine.
​
It was musical theatre that led her to the Franklin (MA) Singers back in the 1970s where she performed in her first productions until her husband gently suggested that she not sing. So she transferred her vast store of other talents to the Walpole Footlighters where she became a mainstay for 45 years. She was also active at the MMAS Black Box Theater in Mansfield. At the Footlighters, Barbara acted, directed, worked backstage, served on the board, and managed publicity for decades. She was slated to direct The Savannah Sipping Society for the Footlighters in October. In keeping with the theatrical tradition: "The show must go on" as scheduled!
​
There are so many dimensions to Barbara that it is impossible to capture them all. She always dressed "to the nines" and was known for her signature hats, sunglasses, and pocket books. In addition to theatre, she loved cross-word puzzles, cooking, gardening, horse racing and red convertibles. Her dinner parties are legendary. She spent many happy days with her neighbors in the Skyline Estates neighborhood in Franklin and at her cottage on Cape Cod. Her daily routine included reading several newspapers where she studied the statistics on Major League Baseball. She was raised a Phillies fan but when she moved to New England she saw the wisdom of converting to the Red Sox and followed them avidly until the day she died. Some of her last spoken words were: "How did the Sox do today?"