A feisty parolee follows her dreams, based on a page from an old travel book, to a small town in Wisconsin and finds a place for herself working at Hannah's Spitfire Grill. It is for sale, but there are no takers for the only eatery in the depressed town, so newcomer Percy suggests to Hannah that she raffle it off. Entry fees are one hundred dollars and the best essay on why you want the grill wins. Soon, mail is arriving by the wheelbarrow full and things are definitely cookin' at the Spitfire Grill.

"A soul satisfying ... work of theatrical resourcefulness. A compelling story that flows with grace and carries the rush of anticipation. The story moves, the characters have many dimensions and their transformations are plausible and moving. The musical is freeing. It is penetrated by honesty and it glows." N.Y. Times.

Dinner for Several
A Comedy by John Shanahan
Directed by Stacey Shanahan
February 8-24, 2008

All Carter Sullivan wanted to do was make a quiet dinner for his date. So how did he end up cooking for her, her roommate, his ex-girlfriend, his roommate, and his roommate's friend? A funny look at love and relationships and the foolish things we do for them.

Four years after Dinner For Several received its first public staged reading at the Footlighters, we are delighted to bring this comedy from local playwright John Shanahan back to our stage for a full production as part of our 2007-2008 season. He's polished it since then and it's seen a production in our neighbor theater in Medway, but it has lost none of its wit and charm.
​ 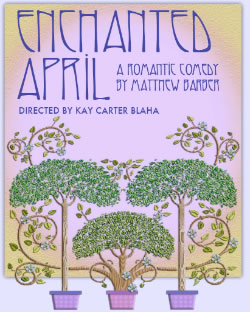 Starring (in order of appearance):Elaine Sheffield-Bono, Marianne Phinney, Stephen Lee, Paul Campbell, Cathy Larson, Pat Hainsworth, Matt Meier, and Evie Rayburg
​
AVAILABLE. To those who appreciate wisteria and sunshine. Small castle on the Mediterranean in Northern Italy. To be let for the month of April. Cook, gardens, ocean view.
When two proper London housewives decide to rent a villa in Italy for a holiday away from their bleak marriages, they recruit two other, very different English women to share the cost and the experience. During their enchanted month in the Ligurian villa, the ladies fall under the spell of their idyllic, sun-drenched surroundings. There, amid the wisteria blossoms, they rediscover laughter, learn new truths about themselves and find just the romance they need, though perhaps not the romance we - or they - expect to find. ​